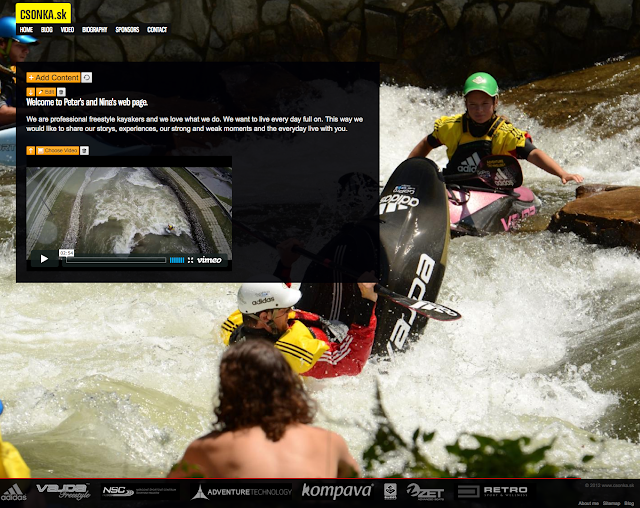 It is already two week since we got here to NOC. We were here last year for World Cup so we know this area well. We arrived to Atlanta and drove to Nantahala.
Nantahala gorge is nice area surrounded by great Smoky Mountains. It is quite in the middle of nowhere. We started to train as soon as we got here. We had to take the advantage of not manny people being here already so the lines in the eddy were shorter. As the days passed more and more paddles has arrived.
We trained twice a day but now we slowed down and do just one training a day and every third day is a rest day. I definitely think you need to slow down as the event is coming closer because your body need more time to recovery.
This year the level of paddling is very high. And not just in men class. Even woman and junior classes get much better.
The competition starts at the start of september and till this time we have to prepared ourselves physically and mentally for the Worlds. It is not easy here just because you don't have much to do here except kayaking and the weather wasn't very nice for last two weeks. But we have many friends here and we do our small routine each day to not get bored. You can love kayaking but to stay five weeks on one place and train full on only here is really tough task. But on the other hand this atmosphere is great you can see many  foreign paddlers from all around the world paddling together, to share their stories, experiences and hanging around.
So for now we will continue in our preparation and will look forward for the competition to start.
Wish us luck. This year it will be big fight for medals.
See you.
Nina. 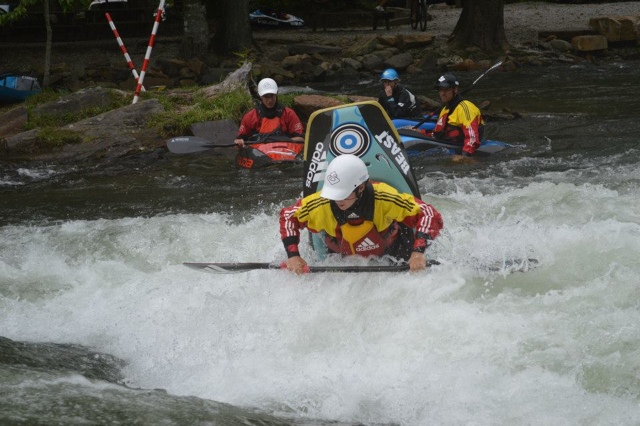 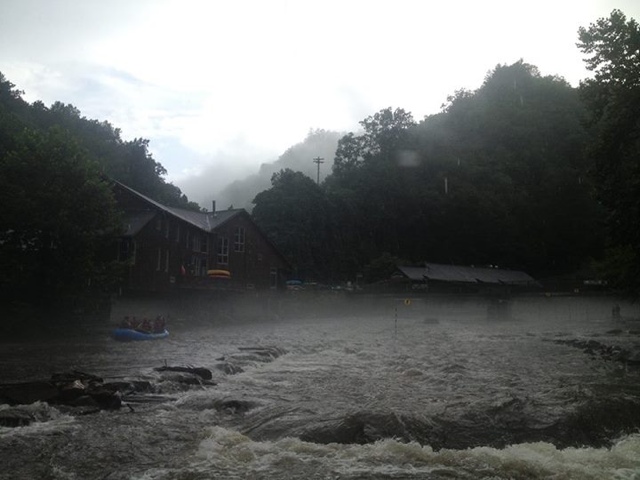 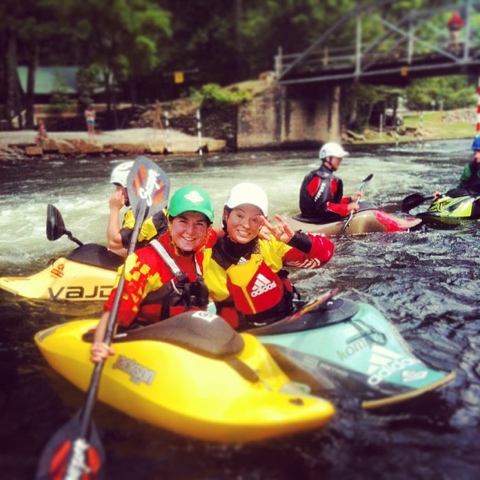 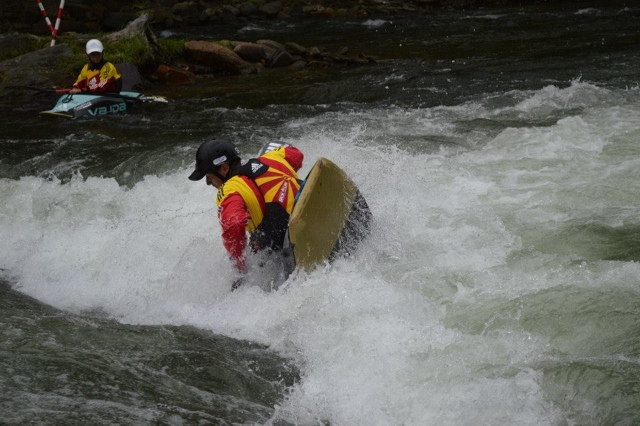 Second Eurocup in Prague and Festival Divoka voda in Cunovo

From our training in Nottingham we went straight to Prague to have some training before the second Euro cup. We stopped on our way in Belgium at the see, to have some fun in the waves with our dog Puko. He really loved to jump into the waves and play. I was also trying to teach him how to swim-surf the wave on the way to the sure.
After many hours we arrived to Prague to the national white water stadium. We could train only in some hours written on the schedule board, because all the slalom kayakers are really stressed and have to paddle there 2 moths before the worlds and nonstop...
Anyway we was spending all the time in the water with kayaks or just swimming in pool because of the tropical weather. 40 degrees were just too hot. The competition started at saturday and I had to say it wasn't easy. The spot was a bit difficult, and the skills level of kayakers is rising every year.
In the qualis I won the first place and Nina had pretty good runs too and finished first as well. We had the semifinals in the evening where Bartosz from POL did and incredible run and beat me in some points. Behind us was Martin Koll from GER. In woman semifinals Nina still hold her lead, so we could have a nice evening with our friends doing the pancakes and some other sweet stuff.
The sunday finals were really exhausting. Tomasz from POL did an incredible ride and I had to beat him. It didn't work out for first two try’s. In the last ride I pulled out almost everything I was able to do in my rides and managed it in to the 1st place , Thomas was 2nd and Martin Koll on the 3rd place. In Woman Nina did her best and got 1st even she wasn't really happy with her performance during the finals, second was Anna RUS and third was Zofia POL.

After the Eurocup we went home. It was around a month we were not home. The week was super busy because during the next weekend I had to organize some other festival in Cunovo Slovakia. This festival was made more for public and not only for the competitors. There was rafting, jetski , beach volleyball, surfing and many other activities. We also decided to make a small competition for kayakers as kayak cross and kayak freestyle. Me and Nina we wasn't competing at all. We just was organizing some of the festival events. Oh sorry we was competing in raft with the rafting team Vodohospodárska výstavba with her Mother and step father. We did all right but unfortunately we didn't won.
We have been trying to make the festival as best as we could for all the paddlers and I think we were successful. We even managed to have price money!
It was a sick weekend with lot of fun and nice evenings.
After the festival we had one day to pack all our stuff and leave to USA for the Worlds so next update will be from there !
See you soon
Peter 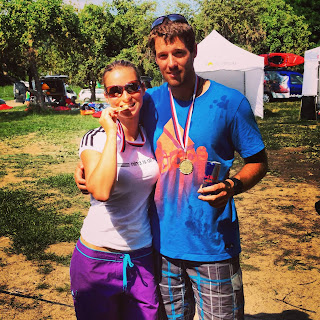 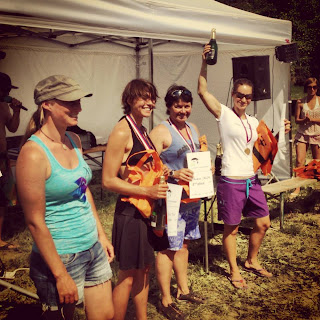 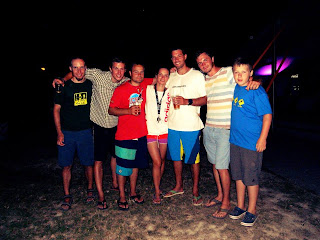 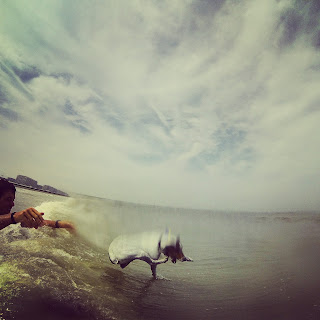 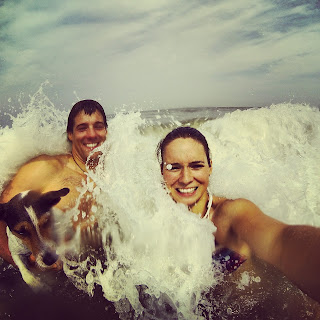 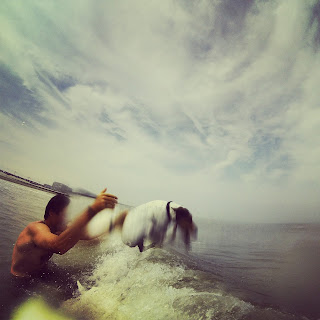 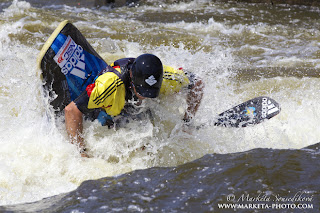 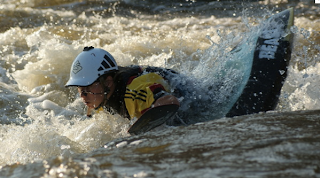